In celebration of the American Cancer Society’s 100 years, The Image Of Magazine is proud to lend its support to those who contribute. Speaking with Michael Miller, you really get a sense of what “YouBeforeMe” stands for. “YouBeforeMe” is a private foundation devoted to changing people’s lives.  Each year the foundation provides grants to deserving individuals and Institutions dedicated to improving our planet in the areas of medical, scientific, educational and humanitarian causes.

“YouBefore Me” was formed by Michael Miller, a Managing Director at Northern Trust in Los Angeles and his wife Hayley, who are devoted to making the world a better place, as well as giving help when and where they can. “YouBeforeMe” was started for a number of reasons, but the primary catalyst was Hayley’s sister being diagnosed with colon cancer at a young age. People asked what they could do which is typical with caring friends and family. Michael stated that “friends and family asked what they could do. Faced with the common reality: the unfortunate truth is that there is typically nothing any individual person can do. This leaves both the person asking and the person in the situation with a horrible sense of helplessness”.   Hayley and Michael decided to take the bull by the horns and create a mechanism to help worthy causes and those with illnesses. As Ambassadors to the 100th Birthday Ball for American Cancer Society, Hayley and Michael decided to host an event to raise sufficient funds for a clinical study in Hayley’s sister honor.  On May 14, ‘YouBeforeMe’ will host local supporters, Young Hollywood and other celebrity guests” to a night of entertainment and caring. 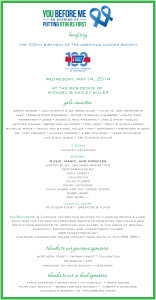 When asked what to expect for the evening, Michael responded, “A night of music, magic and miracles”. Along with the support of devoted friends and family, Michael and Hayley organized the event in less than 7 weeks and they anticipate over 200 attendees. All performances and appearances have been donated and all non-sponsored costs are being paid by Michael and Hayley to ensure that every dollar raised goes directly to finding a cure. Michael stated that  “The response has been extraordinary”.

At the close of the interview we asked Michael what he would like the message of the evening to be: “That’s simple” he said, pausing with emotion… “When you ask what you can do, be prepared to do something when you get a response that states other than nothing”.  Give whatever you can whether it is money, service or simply compassion.  A marathon is a 26 mile run made up of individual steps. The search for a cure is the ultimate marathon and the sum total of our collective individual steps, no matter in what form, will get us to the proverbial finish line….the discovery of a cure”

‘YouBeforeMe’ is proud to participate and contribute to the 100th Birthday of the American Cancer Society.  As the largest voluntary health organization in the United States, the American Cancer Society (ACS) is passionately committed to saving lives from cancer. ACS is working to create a world with less cancer and more birthdays – a world where cancer never steals another year from anyone’s life.  Thanks in part to the work done by ACS, nearly 14 million cancer survivors and countless others who have avoided the disease will celebrate another birthday this year. (American Cancer Society)

Michael stated that he was privileged to work with a institution like Northern Trust which is one of the most  philanthropic supporters of community and non-profit causes in the nation.

When visiting  www.youbeforeme.net, I was drawn to the BLOG question “WHAT IS IMPORTANT TO YOU”.  In reading the replies, you will be compelled to do something rather than nothing. “Do Something” today to create another birthday. 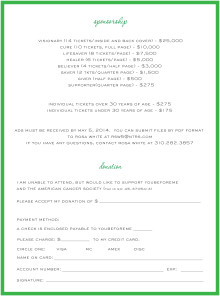